Derrick was born on Apollo, the son of an EarthGov Naval Officer and a wealthy local merchant’s daughter. Derrick was the youngest of the couple’s four children. A carefree, jovial boy, more interested in sports and physical activities than in studying or listening to his father’s old stories of military honor, Derrick grew up believing he could do anything. And he usually could.

While his brothers and sister focused on their grandfather’s merchant business, or on following their father’s footsteps in the EarthGov Security Forces, Derrick grew up an attractive, brawny young man, focused on fun, girls and sports. He didn’t like to study, but when he did he displayed enough smarts to easily pass his classes with no need for hard work. His good looks, brash manner and fearless personality made him idolized by the girls and respected by the boys.

When the time arrived to decide what to do with his life, Derrick decided to enter EarthGov Academy. His proud father deluded himself into believing his son had finally developed a sense of responsibility and wanted to follow family tradition, but in reality Derrick saw the Academy as the easiest way to get his father off his back. He imagined himself as a hotshot uniform-clad starship pilot living on the Mother Planet, the epitome of success and attractiveness. He was self-confident enough to believe he’d breeze thru the Academy. He had given no thought to what happened afterwards, as he usually didn’t plan that far.

At the Academy on Earth, Derrick gained a reputation as a reckless, risk-taking natural leader. With three other friends, all devoted to him, he formed a small band and spent most of his free time pulling off the most outrageous challenges and pranks. It was one of these that ultimately changed his life.

Evan Mollenar was an outstanding pilot, an all business, no-smiles student from Earth, and the closest to Derrick in piloting skill. He was thus, in Derrick’s mind, his main competitor. A few months before the end of the final term Derrick and his friends decided to teach Evan a lesson. They ambushed Evan during one of his flight practice runs in the upper atmosphere and took turns maneuvering around him in sub-orbital space, teasing and dizzying him. They thought Evan, good pilot as he was, could take it. As Evan panicked and lost control of his ship and plunged headlong into the atmosphere, disintegrating his ship, Derrick and his friends realized how wrong they were.

Back on Earth, Derrick and his friends nervously awaited their inevitable expulsion and arrest. There were a million ways in which their prank could be detected. The Assistants on both Evan’s and their ships should have sensed the maneuver and tried to dissuade them or take control (except that Derrick and his friends had temporarily disabled their own assistants, a suspicious thing in itself). The detection systems in use around Earth should have recorded the entire maneuver. The curious, unauthorized path their ships took could be deduced from their engine signatures. In this day and age, they were drowning in damning evidence. Escape was impossible.

Except that, mysteriously, none of this evidence ever surfaced.

Almost nothing of Evan’s ship could be recovered, certainly not the computer logs from Evan’s Assistant. There had been some sort of problem with the V-World connection and parts of the ship’s transmissions were lost, and neither Evan, Derrick nor his friends had any records of their personal activity during the flight. Their Assistants had been detected as active by V-World, except that they didn’t sync their offline info with their vault, instead erasing it. The radar and detection records should still have shown the maneuver, but for some reason, either because the human space traffic investigative bureaucracy was incompetent or because it didn’t investigate carefully enough, no one came to arrest Derrick or his friends. After Evan’s funeral had come and gone and several weeks had passed, Derrick was forced to face the truth. He was responsible for Evan’s death and had miraculously (suspiciously?) gotten away with it.

Derrick’s friends felt relieved and got on with their studies, but Derrick was now a changed man. Consumed for the first time by guilt and shame, unable to understand why Evan was dead and he was free, he was forced to accept the consequences of his actions. The night before his graduation Derrick left EarthGov Academy and never came back. His former friends, who had carefully guarded their shared dark secret, were alarmed. Here was one who could, if he ever decided to break their shared oath of silence, destroy all their careers. Derrick now knows he has three enemies where he used to have friends, and is careful everywhere he goes.

Derrick decided to escape into the only place that would not inquire about his past and accept his skills for the future: The Circle. His (official) accomplishments while at Earth Academy were quickly recognized, and he became the leader of one of the small groups the Circle is composed of. He excels at leading small teams in dangerous missions, and goes out of his way to help the needy and weak. There is still a trace of the easy-going, charismatic party guy in him, but it is tempered by the seriousness of someone who tries to atone for his sins by helping and saving as many people as he can. He still cannot make sense of the fact that his crime was not discovered; in his mind it borders on the impossible that so many records were missing. He fears seeing his secret come out, maybe by someone figuring out the truth, or by some of the missing records from his sensor or the detector satellites surfacing. He fears how such a secret would be used against his family in the corrupt, crime-riddled environment of his home planet of Apollo.

Above all, he fears facing his father, and having to explain what he has done.

At first glance, Derrick looks like your stereotypical V-World fantasy leading man: a well-built, square-jawed, attractive young man of about 24. He dresses formally with Circle vacc suit uniform, and keeps his hair cropped short. Most of the time Derrick is humorless, factual and serious, and whenever he “lets himself go” he usually gets back in control of himself really fast. During emergency situations, however, Derrick’s true personality bubbles to the surface: He becomes electric and transmits his energy to everyone else; he quips and drops witty comments and cracks jokes at his opponents’ expense; and his words and body language shows his subordinates he really cares about them. Once the fight is won, Derrick will celebrate for a few seconds and then slip back into his personality mask. Derrick never abandons defenseless people during a fight, and does not hesitate to place his life in danger to save his subordinates.

When off duty, Derrick does not like to be surrounded by many people, at most by those he trusts. He thus is not the best negotiator or diplomat in his team. But he is honest, capable and trustworthy. Recently, however, he has been eyeing alcohol as a way to forget his painful memories. He’s already lost consciousness to drink twice in the past few weeks, and is starting to worry that maybe he has a problem.

Derrick’s Assistant’s name is Jonathan. He has the appearance of a young male. Dressed like a recently graduated EarthGov Academy Officer, Jonathan always assists Derrick seriously, behaving like a military subordinate. He rarely offers proactive advice or comments on the actions of his owner, but sometimes it seems like he was on the verge of crossing the line. Jonathan takes care of all communications Derrick needs to do with anyone, even his family. 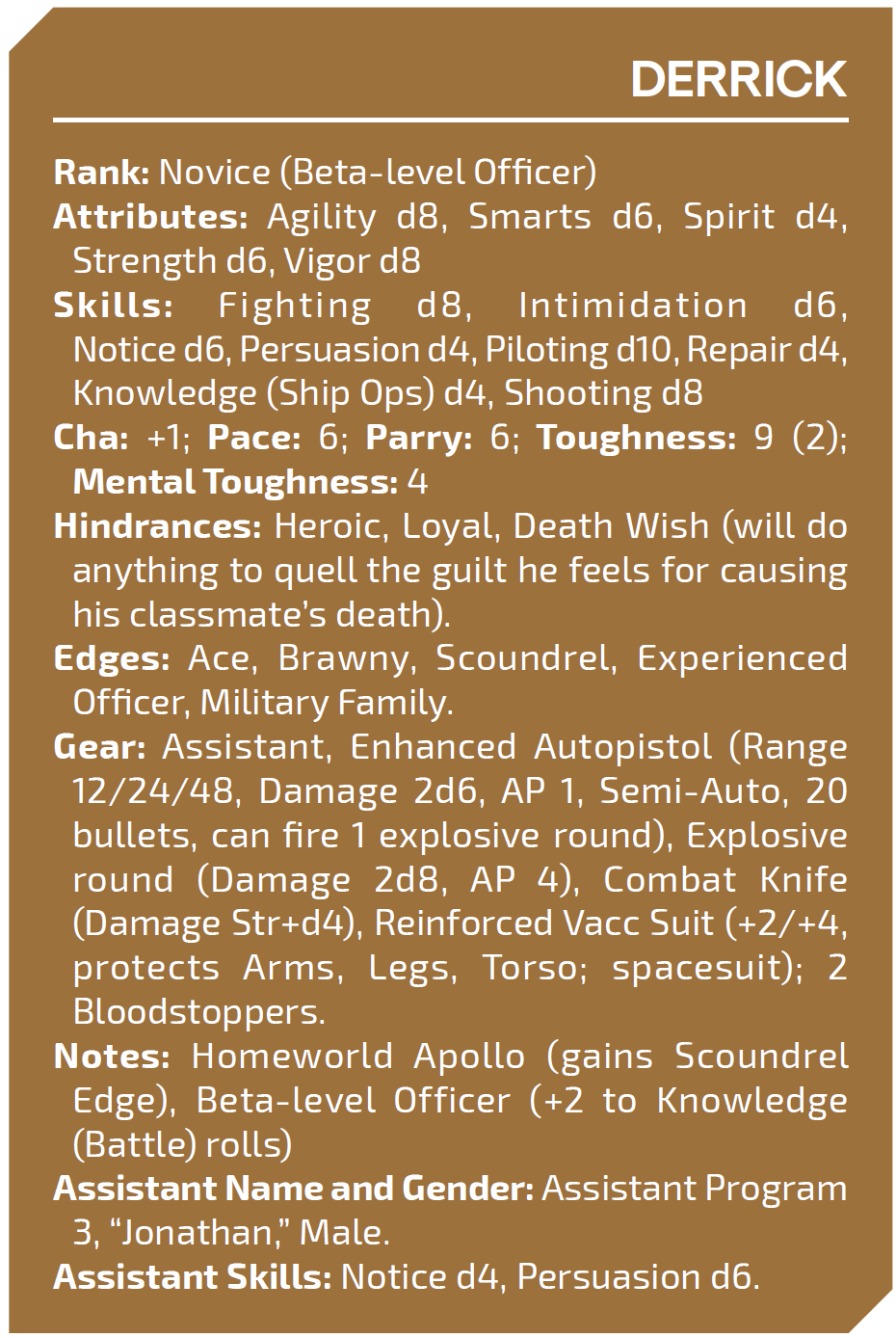