Seela Atherton was born in the heart of Melissant, capital of Concordia, to a very wealthy and politically connected family. She was the eldest of Lord Atherton's two daughters. The Atherton family was practically an institution in Concordia: An Atherton had been one of the leaders of the colonizing expedition to the planet, and thus had the choice of the best lands in the planet. Over the coming decades, the Athertons would only increase their power and influence. In short, Seela was powerful even before being born. Lord and Lady Atherton knew how to play "The Game", as they called it: The complex mix of diplomacy, manners, social activities, and charm that allowed them to be in the center of things and connected with the most powerful and important people on the planet.

Into this exclusive world came Seela, and she arrived gifted with everything she could possibly want: A very attractive girl, with a sharp mind, lithe and athletic, and endowed by nature with a disarming charisma and social skills. Just the daughter Lord and Lady Atherton wanted. Of course, it didn't hurt that her parents could afford the very best genetic improvements for their children. Seela, while a mischievous, active girl within her family, was perfectly comfortable keeping up her role, playing up the model child in social gatherings and formal dinners, charming the adults with disarming smiles and the right comments, displaying perfect manners, remembering every name. As a teenager and then a young woman, as her beauty bloomed, her splash on the social scene could only grow. Her ability to convince anyone of anything, while always keeping a smile, was the best display of negotiation skills her father had ever seen. The future looked bright for young Seela, and Lord Atherton began to think that his young daughter could take the Atherton family to even greater heights, possibly to interstellar importance.

Seela first met Aaron when she was seven and Aaron was nine. He was the son of one of the stable hands in one of her family's summer houses next to the little village of Albigny. She had gone there on vacation for a few weeks, and had escaped the house to explore a river when she slipped and fell into the turbulent waters. Aaron came out of nowhere and pulled her out. Aaron was the only person Seela had known who did not seem intimidated by who she was. They spent the next few hours playing, then talking, and by the end of the evening, when one of the housekeepers finally came looking for her, they were already fast (secret) friends. He darted between the trees before the housekeeper saw him, but not before gifting her one of the orange-green daffodils that grew around the woods, one of the many mutated flowers brought from Earth.

Every single day in what was left of the vacation, and on every vacation afterwards, Seela found ways to escape her protectors and spend time with Aaron. He showed her a world that had been totally foreign to her. She learned to disguise her identity, change her clothes and way of walking and talking so she wouldn't be recognized as she visited Albigny and other nearby villages with Aaron, pretending to be just another village girl. She invented excuses to forget her lenses at home, or to disable them, and password-protected Chloe, her Assistant, to keep her from spilling out what she was doing. With Aaron she learned to fish, to feed pigs by hand, to swipe warm loaves of bread when no one was looking, to jump from tree branches and to climb house walls. Most of all, she learned how the world really worked, away from parties and diplomatic and social meetings.

As she grew, Seela discovered she was different, Aaron had made her different. She of course kept on playing "The Game," as she was so good at it. But the thrill of misbehaving, of being someone else besides Seela Atherton, was too strong a pull. She kept going "on vacation" to their summer house (and to Aaron) as often as she could. And, before long, she was also walking the streets of Melissant, under an assumed name and identity, and mingling with whom his father would call "her inferiors." She particularly enjoyed sneaking into or out of places, sometimes by lying about her age to a security guard, or sweet and fast-talking the muscle at a night-club, and sometimes by just walking up the ceiling and into a window, the way Aaron would. Her newly-acquired skills in disguising her digital identity and IDTag were invaluable during these escapades.

Space knows what would have happened if someone had discovered these reckless adventures. Fortunately, she was talented enough to never be discovered and, who knows, she could have kept at this for a long time. But when she turned nineteen things came to a head.

One day Chloe brought her urgent news from Aaron's feed, where she secretly followed Aaron, as he followed her. Aaron had been arrested in Albigny. It should not have been a big deal (out of curiosity he had broken into a house to steal a bowl of a delicate, expensive dessert about to be exported to Earth; nothing she couldn't have obtained for him with a snap of her fingers, had he asked), but by the time he was discovered things took a turn for the worse that ended with several wounded guards and a burned-down shop. Now he was sure to go on trial and to jail. Seela immediately went to help him and in doing so broke the unspoken but sacred rule in her family: Don't make a scene. She, practically a Princess of Concordia (if such a thing existed) got involved pulling favors, using her name, charms, skills and money to get some unknown low-class boy released from jail. While she got what she wanted, she was not able to control the uproar or the gossip, and soon enough the Athertons became the kind of news they had always worked hard to avoid. Why had the daughter of Lord Atherton done that? Who was the boy? Is there some juicy, embarrassing secret here?

Lord Atherton did what he did best to control the damage: He pulled in favors from press, media, politicians and celebrities, and silenced the media with nothing but a rumor or two leaking out. Then, trembling with rage, he and his wife met their daughter behind closed doors. The conversation was violent and terrible. Now very suspicious, Lord Atherton had ordered his aides to dig up all V-World records for Seela, and pieced together the truth: The visits to Aaron, the fascination with the summer house, the “misplacing” of her lenses, the password-locking of her Assistant and connection records, the geo-positioning information, the secret visits to the underbelly of Melissant, everything. Many of the words said that night could never be unsaid, the damage irreparable.

Aaron, knowing how easy it was for Seela's father to call up a favor from some police big-shot and jail him on any excuse, had vanished as soon as he was released. However, as Seela walked into her room that night, she found an orange-green daffodil on her pillow, his last thank you and good-bye. At that moment Seela made her decision.

She had many times heard her father and his political cronies talk about The Circle in unfriendly terms. Although the Circle's position and respect among the population was strong, grounded by the history of that institution and its participation in the founding of Concordia, the fact that they took a neutral position in the conflict with Bay Jing a few decades ago still angered the powers that ruled Concordia. Eventually the Circle would become a thorn on their side, maybe as the inevitable second conflict with Bay Jing approached.

So the very next day Seela took some simple possessions and jumped on a ship to Earth to join the Circle (Circle Headquarters is in Concordia, but Seela knew she first needed to go beyond her family's immediate reach). She made sure to leave several farewell video recordings to her parents, friends, and important political acquaintances. These smoothly-written messages cheerily explained "the family's decision" to have her join the Circle as a way, requested by her and approved by her father, to learn more about human space to "broaden her horizons and thus the future of her family." The alibi was so skillfully written and acted that it made it very easy for her parents to continue the charade, painting this as a logical family decision. Her mother could roll up her eyes with her friends, commenting on "you know teenagers, how these wild children need to see the world" while the other ladies approved.

Her father was furious, of course, not the least with the fact that she chose to join the Circle specifically to spite him. But she had not broken the sacred rule, and had played The Game to the end. The family's name had been protected. But Seela knew that things had been broken, and she could not return easily.

When she got arrived at Earth the Circle, always in need of officers with negotiation and diplomatic skills, accepted her at once. She's trained for a few months and finds her new lifestyle liberating and very fitting of her recent rebel ways. Her charisma and talents have allowed her to rise fast in the organization, and she is about to be given her first real missions with her new team.

And yet she knows her travels will take her to Concordia; Circle HQ is there, after all. There will come a time when this lowly Circle officer will have to face the fact that she is heiress to one of the largest fortunes in human space, and to a leading position in the ruling elite of the most powerful of the Seven Worlds.

Besides, there's Aaron to think about. He surely must be somewhere.

Seela is an attractive brunette about to turn 20. She is a bit taller than normal. She has a thin body, and does not look muscular, but is agile and athletic. She is usually smiling, in full “charm-on” mode. On duty she’s usually dressed in immaculate Circle vacc suit uniform, but she has a wardrobe of very expensive clothes for every occasion, which she wears as soon as she disembarks. She does not dress too formally unless it’s necessary, and usually prefers clothes that do not step in the way of an emergency romp on the roofs. She never wears anything “inappropriate” or suggestive, even if it could give her an advantage. Even so, because of her taste in clothing and fashion she always looks nothing less than spectacular. Although Circle regulations require her to carry a gun, she usually tries to keep it hidden within her clothes unless it is indispensable to carry it in a visible place.

Chloe, Seela’s Assistant, looks and acts like a “best friend” and confidant attractive girl from Concordian high society. Elegantly dressed, Chloe is extroverted, curious, nosy, and prone to inappropriate comments. She’s always advising Seela on how she looks and how she dresses. In the rare occasions when Seela needs it, though, Chloe can become serious and all-business. 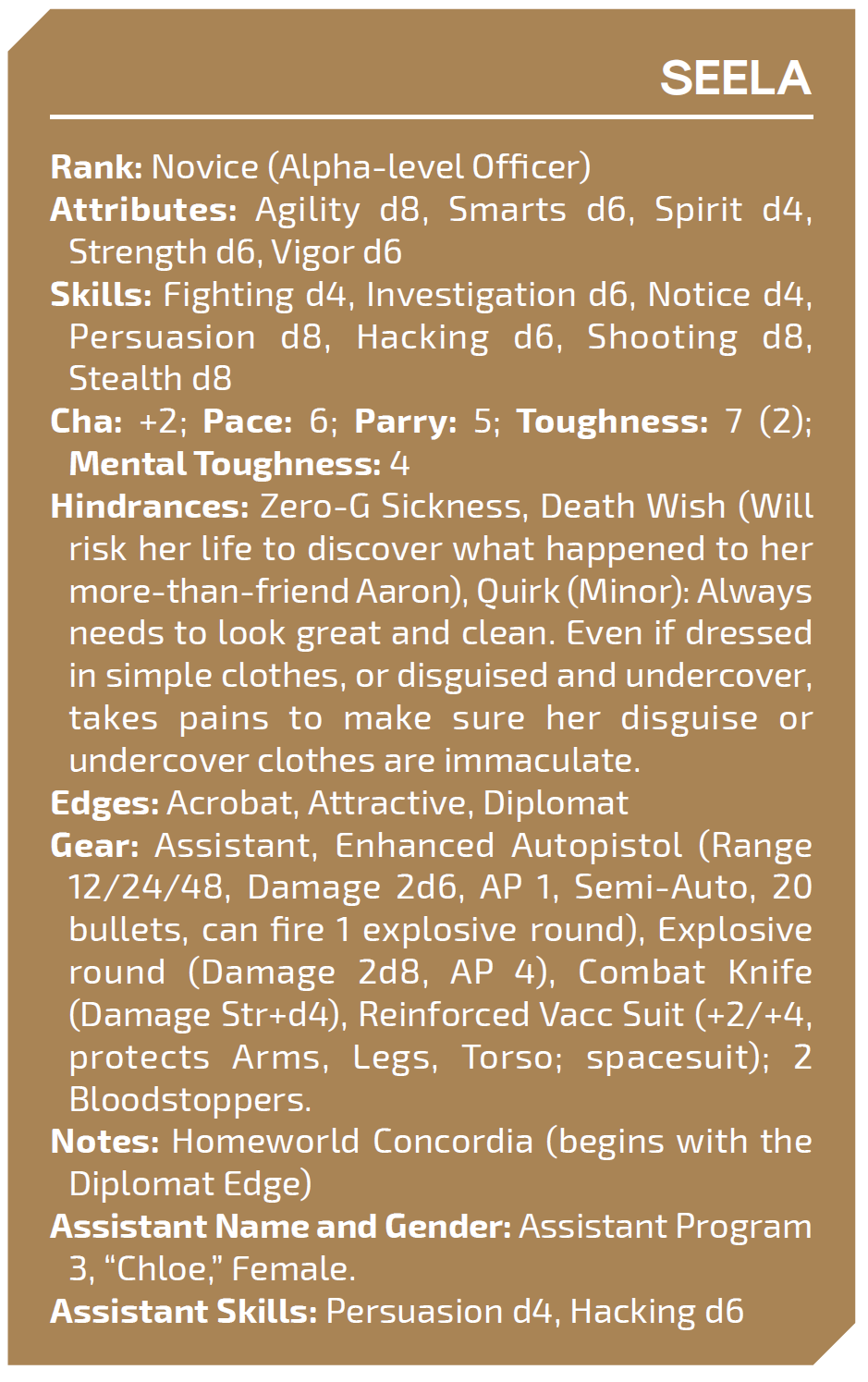 Before we get started, you might want to watch this four-and-a-half-minute video: There! That video's this Designer Diary in…

Savage Worlds already has a great set of vehicle combat and Chase rules. The goal with the Seven Worlds…